Do you need a fertility treatment?
Get your individual report at real time
HomeAssisted Reproductive Technology (ART)

The act of bringing a baby into the world is described as a miracle. There are times when this term makes a special sense, since these cases are very curious and unusual.

Provided below is an index with the 9 points we are going to expand on in this article.

The baby with the greatest weight

the heaviest baby of the world was born in 1955, Carmelina Fedele gave birth to a child of 10.2 kg. In 2009 the second baby with the greatest weight, with 8.7 kg, was born in Indonesia.

The baby with the greatest weight

Lina Medina, from Peru, was born in 1933 and became mother when she was 5 years old and eight months, her baby was born in 1939 with a weight of 2.7 kg. Lina's parents took her to the doctor after seeing a lump in her belly, they thought it was a tumor until pregnancy was confirmed.

Rajo Devi Lohan is the oldest first time mother of the world, she became mother for first time in 2008 at the age of 70. In India many women undergo in vitro fertilisation treatments at an advanced age after attempting to get pregnant naturally all their life and without achieving it.

In 2008 Thomas Beatie surprised the world with photographs showing he was in advanced pregnancy, he was the first man who got pregnant. Thomas was born woman and he underwent mastectomy and started a hormone therapy to a sex reassignment, although he always preserved his female genitals. His wife was sterile and they decided that him would undergo a in vitro fertilisation treatment in order to have children. So far he has given birth to three babies.

The most multiple birth

In 2009 Nadya Suleman appeared on the cover of all media after giving birth to eight babies in the same labour, doctors expected seven babies, the eighth arrived by surprise. The story of this woman is very polemic due to she was a single mother without resources and turned to assisted reproduction after having had six children previously.

In the US there is no limit for embryo transfer after in vitro fertilisation and although from this birth it was suggested to change legislation, it remains the same at the moment.

Although it is not usual, there are interracial couples who have fraternal twins, each one has a different skin colour. Moya and Leah Durrant came into world in 2008 and they joined the case of Marcia and Millie Biggs, fraternal twins, born in 2001. Their eye and skin colour are different, since each one has characteristics of one of their parents.

Black parents with a white baby

This white child is called Nmachi, she has blond and blue coloured eyes, what is surprising is that her parents are this Nigerian couple. The child is neither albino nor suffers from skin disorder, it was genetically proved that she is the daughter of this couple. 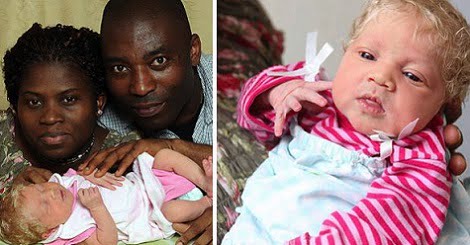 Black parents with a white baby

We make a great effort to provide you with the highest quality information.

🙏 Please share this article if you liked it. 💜💜 You help us continue!

Find the latest news on assisted reproduction in our channels.

Post a comment
You are not registred?
Sign up here
The information provided on this site is designed to support, not replace, the relationship that exists between a patient/site visitor and his/her existing physician.

This site complies with the HONcode standard for trustworthy health information:
verify here.

Certified Medical Website by the Official College of Physicians of Barcelona

Signatory of the Diversity Charter